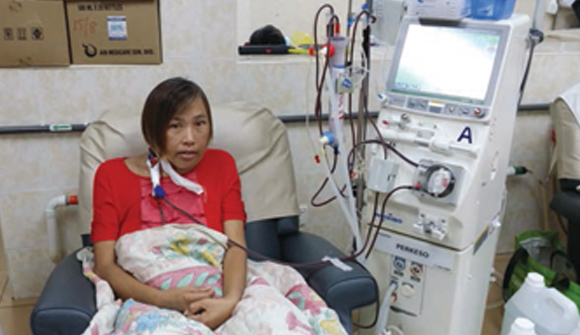 Chew Keng Poh lived in hardship during her early life and was educated only up to Standard 3. She devoted her life to looking after her family. However, the tables would eventually turn on her.

Although she was diabetic while she was pregnant with her daughter, she still lived a seemingly normal life. One day in January 2013 she experienced swelling in her right leg, with a sore in her right thigh which eventually infected her right toe as well.

At this point Keng Poh’s daughter took her to a private clinic. The clinic doctor did not have good news. She was suspected to have chronic kidney failure and would need to have her toe amputated. She was then referred to the Tengku Ampuan Rahimah hospital in Klang where further tests were conducted.

The tests confirmed the doctors’ suspicions. In addition to complications related to diabetes, Keng Poh was diagnosed with Chronic Kidney Disease (CKD).

“They told me immediately that I would have to have my toe amputated. The doctors also said that they would have to begin serious treatment for my sore and swollen foot. I would even have to undergo dialysis. I didn’t know what to say or think. All I felt was that my whole world as I knew it had collapsed,” said Keng Poh.

It was devastating not only for her but for her family as well.

Her family requested an immediate discharge and a referral letter to allow them to obtain a second opinion at the University Malaya Medical Centre (UMMC). Upon further examination there, doctors at UMMC confirmed the original diagnosis.

Sad as they were, her family remained pragmatic and proceeded to act in the best interest of Keng Poh within their financial means. Upon her family’s consent, her toe was amputated while she underwent treatment for the swelling and sore in her leg. In addition to this, she was also required to undergo dialysis 3 times a week.

Travelling from Klang to UMMC for weekly dialysis sessions soon became a burden for Keng Poh and her family, who requested a referral so that Keng Poh could undergo dialysis closer to home. She was then referred to Pusat Dialisis NKF Bakti in Klang, where she would undergo dialysis treatment, courtesy of the National Kidney Foundation (NKF) Malaysia.

Besides having to undergo dialysis treatment, her day-to-day life changed as well.

“Prior to my condition, it was easy for me to cook and do household chores. But with my condition, I would tire easily doing these chores and found them difficult. What was even sadder was that my husband, who was working, had to quit his job to look after me and help with the cooking, cleaning and other household duties,” said a helpless Keng Poh.

They have to depend on their daughter – their elder child, who works as a kindergarten teacher for financial support as the family received no financial assistance from friends and relatives since they are also not well to do.

As a result of her condition, Keng Poh does not socialise as much as she used to with her neighbours and friends. Neither does she go on tours to faraway places like she used to. Yet, she takes life one day at a time and is thankful to her friends and loved ones who have stood by her through her ordeal.

Keng Poh’s condition is a stark reminder that anyone can suffer from CKD as the disease does not discriminate. It can be a life-changing ailment and kidney patients require all the support and assistance they can get.