THE UPS & DOWNS OF LIFE 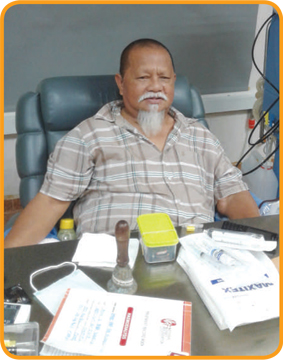 A person’s character is greatly influenced and moulded by the circumstances he has undergone in life. These are what that have enabled Alwi Bin Yaacob to weather his fortunes up till now. Alwi was born and raised in Ulu Yam Baru, Selangor, to a smallholder’s family of 3 children. For the initial five years in his life, he enjoyed a care-free life until his mother passed away. Thereafter, he had to fend much for himself with his father who never re-married toiling to provide sustenance for both of them, while two older siblings had grown up and left the small town in search of their fortunes. After completing his secondary school education, he started working and was heading for a bright future with a good job as a marketing executive but was involved in 1977 with a bad accident which killed his colleague.

Arising from the accident, he was assigned to a lighter job which involved less travelling. Since then, he began to suffer from bouts of illnesses, requiring frequent visits to government clinics with the result that he left his job to become self-employed as a contractor. With no end to his visits to the government clinic and as age was catching up he succumbed to diabetes in 2005 at the age of 58. Ultimately, in December 2010 in one of his visits to the clinic in Taman Tun Dr. Ismail, the doctor in attendance came across swelling of his stomach and legs after hearing him complain of feeling nauseous and having headaches. He was immediately referred to Hospital Selayang where he was warded and subject to a series of laboratory tests. The medical tests confirmed that both his kidneys had failed. He was immediately placed on haemodialysis and his condition improved tremendously.

However, he was advised by the hospital authorities to have his dialysis done in the long term at one of the dialysis centres.

His son after surveying the different dialysis centres applied for him to be placed at Pusat Dialisis NKF – Dato’ Dr. G. A. Sreenevasan (Petaling Jaya) and he was within a short-while admitted.

He is thankful to have his dialysis at the centre saying, “It is indeed a great joy for me to be receiving dialysis in NKF where I have been well taken care of by the staff and treated with great friendship by fellow patients”.

Other than the inconvenience of having to undergo dialysis for four hours per session for three times a week, he does not find any change in the social behavior of his friends who visit him off and on.

On top of it all, his family though initially saddened by his affliction by the disease has taken it in its stride. Further, his daughter-in-law successfully in 2016 secured financial assistance from Baitulmal to pay for the cost of dialysis.

Today at the age of 70 he has fully retired and is happy with his hobbies of planting orchids in addition to enjoying doing light household chores.

Kidney transplant can be a long-term solution for many kidney patients. Unfortunately, 21,759 people are currently on the waiting list for a kidney transplant with the number of kidney failure patients increasing every year. For many of these patients, organ donation has made finding suitable donors difficult.

The National Kidney Foundation (NKF) of Malaysia has launched an organ donation promotion unit at Sunway Pyramid with the support of Sunway Group.