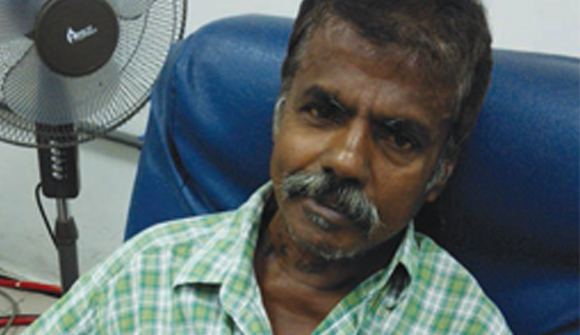 Life does not always go the way we plan; this is the harsh truth that Sentul-born Valentine a/l Savariar has to face. In the 1980s, this eighth child in a family of nine siblings set off to London to pursue his ACCA (Association of Chartered Certified Accountants) qualifications.

One day, when he was about 50 years old, Valentine felt dizzy and went to Hospital Kuala Lumpur (HKL) for treatment. He was diagnosed with hypertension and diabetes, and prescribed the necessary medication.

However, in July 2014, Valentine experienced breathing difficulties and was unable to walk; fluid was oozing from his thighs. His sister-in-law rushed him to HKL and he underwent several medical tests. The hospital then revealed that he had Chronic Kidney Disease (CKD).

Upon hearing this, his whole world collapsed. He was required to undergo eight dialysis treatments at Hospital Selayang. Subsequently, he was informed by the hospital that he had to find a dialysis centre for his treatment.

As his finances were scarce, Dr. Bee Boon Cheak of Hospital Selayang arranged for him to dialyse at Pusat Dialisis NKF-Rotary Damansara in Selayang. However, since the distance to and from his home in Kepong to the dialysis centre took more than three hours, it became increasingly taxing on him.

He requested to transfer to Pusat Dialisis NKF-Nanyang in Setapak which is closer to his home, and with the help of the Centre Manager, he has been receiving his treatment there since September 2014. His dialysis treatment is fully subsidised by NKF and the Ministry of Health.

As a result of his illness, bachelor Valentine’s relationship with his siblings and other family members has become very strained. His friends have also turned their backs on him, as he is unable to socialise like he used to, due to his increasingly restricted movements.

When he is not dialysing, he continues to sell his costume jewellery. He knows that it will not be too long before this too becomes too strenuous for him.

A kidney transplant is the best long-term option to Valentine’s problems, but this remains, at best, wishful thinking. Despite Valentine’s dire condition, he remains hopeful that one day things will improve.

Like him, thousands of kidney patients are praying for a suitable organ donor. Members of the public can help alleviate this situation by calling up the National Transplant Resource Centre (NTRC) for more information or to pledge their organs. The NTRC can be reached by calling 03-26810681/2; Toll Free: 1800-88-9080 or email: ntrc@moh.gov.my