When You Least Expected It 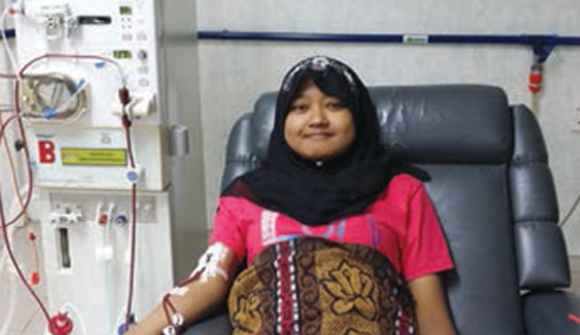 Life sometimes throws a curve ball when least expected. Such was the case for Nurul Nadwa Bt. Badri. Just last year, things were looking up for her. The 33 year-old was an avid traveller, active in sports, particularly netball, and a Master’s holder in Information Technology from Universiti Teknologi MARA.

However, in November 2013, her life unexpectedly took a turn for the worse. Nurul began to develop difficulty in breathing. Her feet, left hand and face also began to swell. She was taken to a health clinic and was examined by a hospital assistant, who immediately referred her to the Tengku Ampuan Rahimah Hospital in Klang. There, she was immediately attended to by a doctor, who found that Nurul’s heart was also swollen.

Upon further examination, the hospital authorities confirmed that both of Nurul’s kidneys had failed.

Recalls a solemn Nurul. “The doctor said that there was no way I could be well again, apart from undergoing a kidney transplant. Until then, I would have to endure dialysis. I realised then that my life would not be the same.

Her parents were equally devastated. They knew that Nurul’s condition would adversely affect their own lives as well, especially when her family was not well off either. As she undergoes dialysis treatment on a thrice-weekly basis, she could only secure a part-time position as an administration officer in a local security firm. Her elder sister also helped out financially, whenever she could.

“My younger brother wanted to donate his kidney to me,” said Nurul, her eyes welling up. “Unfortunately, he was deemed not suitable. So, my transplant procedure is pending a suitable donor”.

Finances aside, Nurul’s day-to-day life had changed as well. “I used to enjoy sports, especially netball. After contracting chronic kidney disease (CKD), I had to give it all up. It was so demoralising. I couldn’t even travel and go on short beach vacations like I used to. Thankfully, I had my family and friends by my side,” explains Nurul. A ray of hope soon emerged. National Kidney Foundation (NKF) of Malaysia had learned of Nurul’s plight and provided dialysis treatment for her.

If there is anything to be learned here, it is that kidney disease does not discriminate – young or old, rich or poor, regardless of status, race, or profession – it can happen to anyone. The key is taking good care of your overall health.